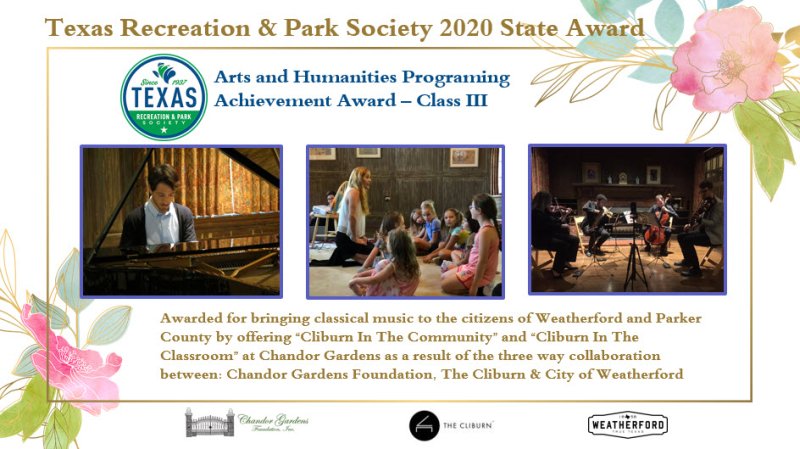 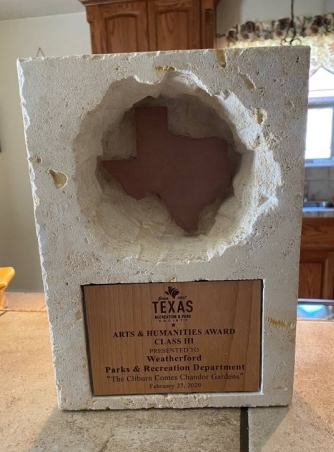 We are so excited about the prestigious Texas Recreation & Parks Society State Award for Arts and Humanities Achievement, presented in February 2020 to the City’s Parks Department. The award recognizes the unique collaboration between The Cliburn, Chandor Gardens Foundation, and The City in bringing classical music to the citizens of Weatherford and Parker County by offering “Cliburn In The Community” and “Cliburn In The Classroom” at Chandor Gardens.

In January of 2019, the Cliburn Artistc Director reached out to the City of Weatherford's Chandor Gardens and the Chandor Gardens Foundation with an offer to partner with them to bring their classical music concerts, "Cliburn in the Community", to the citizens of Parker County. This would be the first venture for The Cliburn and this series outside the DFW metroplex. Since the mission of The Cliburn is to advance classical music throughout the world and the Chandor Gardens Foundation mission is to promote art, culture, and community along with the City of Weatherford's dedication to create a positive environment which fosters carmaraderie for the common good, this collaboration seemed the perfect match. The Cliburn offered to bring Mr. Leonardo Pierdomenico, their 2019 Artist in Residence, to Chandor Gardens for the first "Cliburn in the Community" concert on April 30, 2019.

The two "Cliburn in the Classroom" events for elementary school aged children followed next. The first being on July 20, 2019, which focused on Beethoven and centered on the composer, featuring works almost exclusively by him. This interactive program got the kids thinking about how music conveys different moods and wrapped up with a clapping game. The second "Cliburn in the Classroom" event was on August 10, 2019 with the theme Musical Organizers. Focusing on different musical forms, or how composers us different "rules" and ideas to organize their compositions. It featured music by Chopin, Diabell , Bach and Debussy. The pianist at this program had played at Carnegie Hall and treated kids and parents to a mini concert as they were making their way into the great room. Due to the size of the great room at Chandor Gardens, the classes were linited to forty children and a full house was present at both programs. Parents who wanted to stay and hear the program were permitted to do so and they seemed to enjoy the class as much as the kids. The July and August 2019 "Cliburn in the Classroom" programs marked the first time The Cliburn had offered a summer series of their Fort Worth - Dallas public school based programs.

Then on October 26, 2019 The Cliburn brought PUBLICQuartet as their second "Cliburn in the Community" concert. PUBLICQuartet is a young vibrant, and innovative string quartet. They where the 2016-2017 Quartet-in-Residence at the Metropolitian Museum of Art in New York, and as been hailed by the Washingotn Post as "A perfect encaptulation of today's trends in chamber music". PUBLICQuartet was on the ballot for the 2019 Grammy Award for Best Chamber Music/Small Ensemble Performance.

Our hope is to enrich the cultural lives of our citizens and, through the arts and humanities educational programming for children, give them the appreciation of classical music that will last a lifetime. Rarely, do people get the opportunity to hear and learn from musicians with such mastery of their craft, even in the largest cities. We are proud to be able to offer these concerts and classroom programs completely free of charge to our community and we look forward to continuing this collaboration long into the future. 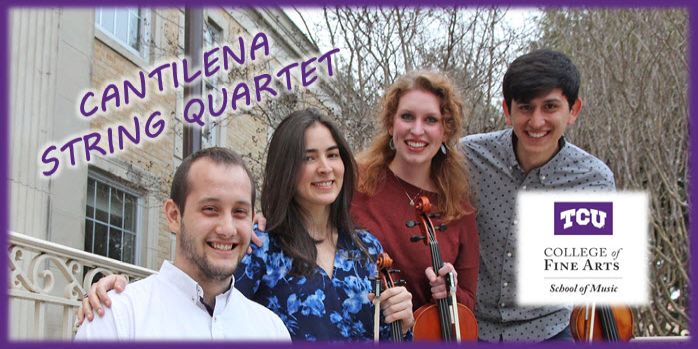 The Cantilena String Quartet is a semi-professional ensemble comprised of undergraduate, graduate and artist diploma students from the TCU School of Music. The four musicians represent the countries of Argentina, Colombia, the Dominican Republic and the United States, and have combined their diverse backgrounds into a shared musical experience described as energetic, passionate and entertaining. 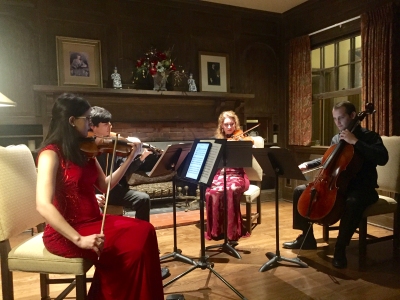 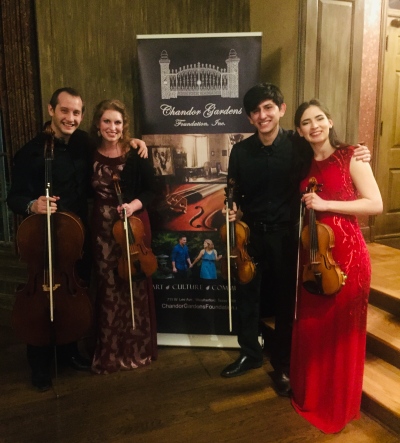 The following are the members of this group (L to R) :

Manuel Papale - cellist born in Buenos Aires, Argentina. He began playing the cello in 2010 and will graduate with a Bachelor's of Music in May of 2020. During his time at TCU, Manuel has studied solo repertoire with Dr. Jesus Castro-Balbi and Christine Lamprea, as well as orchestral excerpts with Jennifer Humphreys and Allan Steele.

Aubrey Fineout - violinist , and a native Texan. She is currently earning her Masters in Viola Performance under the guidance of Dr. Misha Galaganov. She was the recipient of the LA Nordan Fine Arts Scholarship as an undergrad at TCU and also holds a BA in Creative Writing from TCU.

Manuel Alejandro Ordóñez - violinist from Cali, Colombia. He received his Bachelor’s degree in Violin Performance from TCU and is currently pursuing his Artist Diploma at TCU. He is a student of Elisabeth Adkins and Hae-Rim Lee.

Josefina Leonor Guzmán - violinist from the Dominican Republic. She is currently pursuing a master’s degree with Dr. Elisabeth Adkins. Before moving to Texas, Josefina spent the last four years in Tallahassee pursuing her undergraduate studies at Florida State University. She was recently named the first-place winner of the 2020 Britcham DR Young Musician of the Caribbean Award. 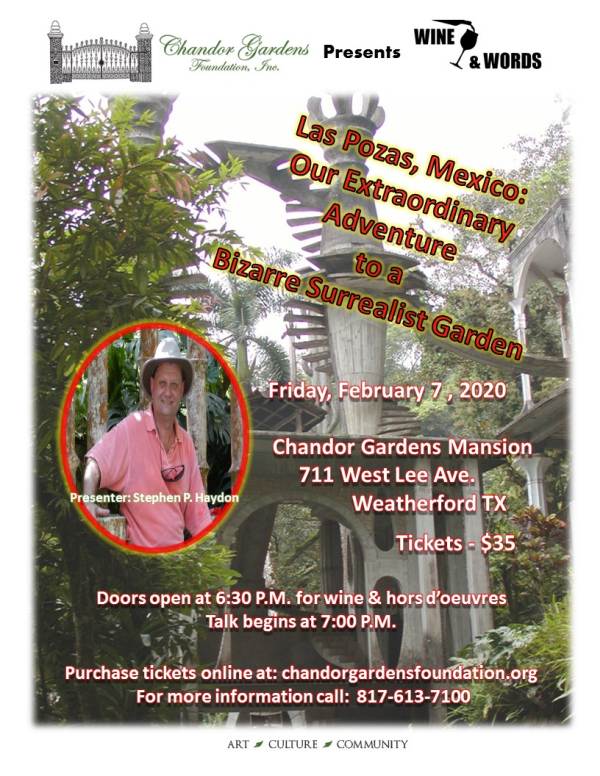 Stephen P. Haydon, Horticulturist for the City of Weatherford, shared his photos and the captivating story of 'Las Pozas', the remarkable surrealist sculpture garden in the remote jungles of Mexico.

Edward James, an eccentric British aristocrat and poet, spent much of his life building a surrealist sculpture garden, called Las Pozas (meaning 'the pools'), in the remote mountains of Mexico . This bizarre surrealist garden, filled with soaring fantastical concrete sculptures set among natural water features, was Edward James' version of the 'Garden of Eden'.

Four friends travelled to find this hidden, gem. Stephen Haydon, Horticulturist for the City of Weatherford, shared his personal photographs from the friends’ adventure to Las Pozas. He also told about the fascinating life and journey of Edward James - from the hamlets of Chichester in West Sussex, England, to the exotic valley of Xilitla, Mexico, where orchids grow wild.

A little about our presenter Stephen P. Haydon:

Stephen has had a diverse and well-traveled career as a professional horticulturist. Even though his passion for plants and gardens took root at an early age, he never dreamed that a life of gardening would take him around the world. Stephen started as a trainee at RHS Garden Wisely, which at that time was the only Royal Horticultural Society Garden in England. Later, he was an international student at Longwood Gardens in Pennsylvania and interned at the Pacific Tropical Botanical Garden in Hawaii. He then oversaw the landscapes of two hotels and a golf course in Bermuda, where he lived for many years. Stephen came to Fort Worth in 1994 as the horticulturist for a private estate. In 2003, he started his own company, Haydon Horticulture, specializing in the care of fine gardens. Stephen is now the horticulturist for the City of Weatherford. 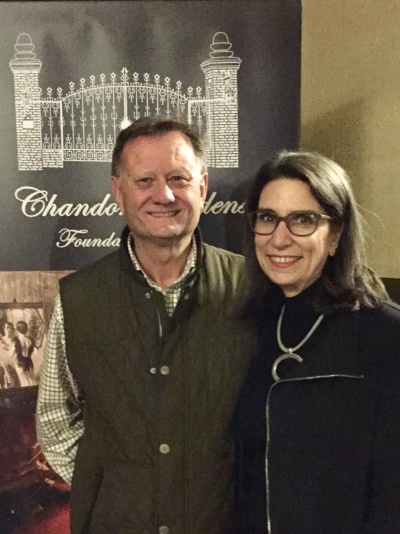 Stephen with his wife Janan Rabiah